One of the biggest and stylish smartphone company Motorola is launched his new Moto G6 lineup. Here Moto G6 play, G6 and G6 Plus would come in this series. These Moto series is coming with stock android, coupled with some moto apps. And the fingerprint scanner is found on the front side, below the screen as usual.

These smartphone having Max Vision display with an 18:9 aspect ratio and MicroSD slot also available here. The color of these smartphones can be Indigo Blue, Black, Silver, and Gold option.  All three models have received quite a few upgrades. Firstly, the Moto G6 and G6 Plus come with dual rear cameras like last year’s G5S Plus model. The G6 Play only gets a single camera, but it’s likely to have a great price to make up for it.

The phone comes with a 5.93-inch touchscreen display with a resolution of 1080 pixels by 2160 pixels. The Moto G6 Plus is powered by 2.2GHz octa-core Snapdragon 630 processor and it comes with 4GB of RAM. The phone packs 64GB of internal storage that can be expanded up to 128GB via a microSD card. As far as the cameras are concerned, the Moto G6 Plus packs a 12-megapixel primary camera on the rear and a 8-megapixel front shooter for selfies. The Moto G6 Plus runs Android 8.0 Oreo and is powered by a 3200mAh. It measures 159.90 x 75.50 x 7.99 (height x width x thickness) and weigh 165.00 grams. The Moto G6 Plus is a dual SIMsmartphone that accepts Nano-SIM and Nano-SIM. Connectivity options include Wi-Fi, Bluetooth and NFC. Sensors on the phone include Compass Magnetometer, Proximity sensor, Accelerometer and Gyroscope.

The Moto G6 (and every other Moto phone announced today) has a headphone jack and a MicroSD card. It also has a modern USB-C port for changing and 15W “turbo charging” with the included charger. Unfortunately, NFC is not listed in the spec sheet of any of these phones, so those hoping to do Google Pay are out of luck. Motorola is touting a feature-packed camera on the G6. The dual camera setup pairs a 12MP main camera with a 5MP secondary camera for depth effects. You can apply a depth-of-field effect to a photo after it is shot, thanks to saved depth information. There’s a selective black-and-white mode, a time-lapse features. RAM and storage is downgraded, too, with options for 2 or 3GB of RAM and 16 or 32GB of storage.. You get one 13MP rear camera and 8MP front camera, all without the pile of extra camera features in the G6. The other big change to the G6 Play is that the back isn’t glass. The G6 Play introduces us to the concept of a “fake glass back”—a clear back made of plastic but designed to look like glass. 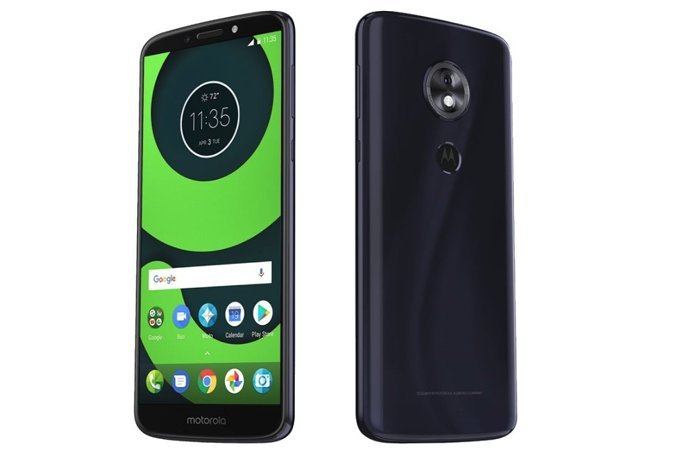