An Apple patent application has surfaced that shows the company is developing a Virtual Reality (VR) system that is meant to be used in self-driving cars that could mitigate motion sickness.

According to the patent published by the US Patent and Trademark Office, the tech giant notes that embodiments of the VR system as described herein may be implemented in autonomous or self-driving vehicles where all occupants are passengers, Patently Apple reported on Friday.

The application suggests that the system might include a VR headset or a projector that would project the images on the interior of the car. As for the motion sickness, the system will have a sensor that would determine as for when the passenger starts feeling uneasy. These sensors will monitor the sweat, pulse rate swallowing, fidgeting of the passenger, and if the person is feeling ill, the VR experience will help mitigate the response. 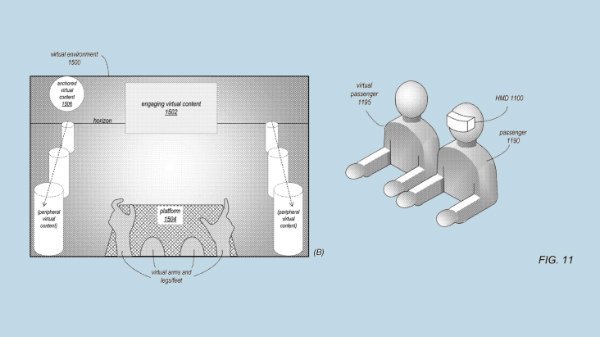 In regards to motion sickness, the system could include a variety of sensors that could monitor the passenger and determine when they might start feeling ill, according to Engadget. Sensors that can detect sweating, pulse rate, fidgeting and swallowing could be used to pick up when the passenger is beginning to show signs of motion sickness and the VR experience could be adjusted to ease that response.

The system would also be capable of adjusting movement and acceleration experienced by the rider to match up what’s been projected on the VR headset. The company could also use visual anchors that display virtual platform to ease a passenger’s discomfort. The company describes that bringing virtual riders into the car will also allow co-workers to meet virtually for a conference in different virtual environments. Riders will also be allowed to choose from fun activities such as floating down a river or chasing down zombies and many more. The system could also make use of car’s heating and air system to enhance the experience. Also, the car’s motion can be a part of the VR adventure. What’s imperative is these are just patents and doesn’t mean that it will come to life certainly. But it’s definitely a cool concept considering the future of cars and AR/VR. Will the company go ahead with its plan and bring this concept to fruition? Only time will tell.