Sony RX0 ll is the new competition for the GoPro. It can be an excellent camera for vlogging because the video quality of this camera is way better than any GoPro. It also has a flippable screen which will help a lot in vlogging.

Sony RX0 ii has an Exmor RS sensor with BIONZ X image processing system. It can take shots up to 12,800 ISO. This camera comes with a non-changeable 24mm ZEISS lens with an aperture of F4. It has IPX8 waterproofing and IP6X dustproofing.

This camera can record 4K 24p/30p video with electronic stabilisation. Sony RX0 ii can take 16FPS6 continues shots. It can record super slow motion at frame rate of 960fps in HD resolution with sound. You can even record normal slow motion on 480fps.

Sony RX0 ii has a mic input which is again very convenient for vlogging. You can even record at S-Log2 format by using this format you can do awesome post-processing of a video. It has a 180° tiltable LCD screen which will help in vlogging. 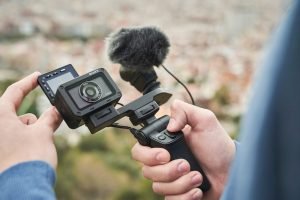 This camera has a customizable key you can choose a particular function for that key according to your shooting style. It has built-in Wi-Fi for file sharing. It has a soft skin effect which reduces wrinkle and dullness from your skin for better portraits.